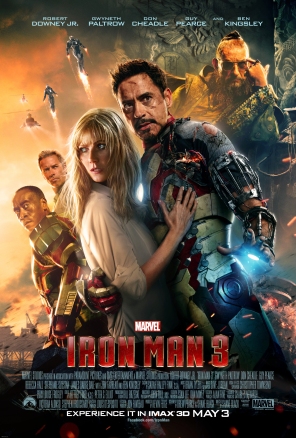 H:5 What many have complained is the movies biggest weakness is actually, in my opinion, it’s greatest strength – Tony spends very little time of the movie in the actual Iron Man suits. But this is why the movie does so well – could his character go through more development? He goes from hiding behind his suits to deal with his fear and PTSD to understanding that he doesn’t need his gadgets and suits to be a hero – he is Iron Man. And to make the character transformation as literal as possible, he ends the film getting his Arc reactor taken out of his chest – the ultimate symbol that he, as a person, is more than a suit of armor.

V:3 As much flack as this movie got over its portrayal of The Mandarin, you cannot deny that the first time you watched it in theaters, until the big Ben Kingsley reveal, The Mandarin was brilliant and terrifying. He felt like a real villain with a real agenda besides “evil for the sake of evil” like so many others. And thanks to Kingsley’s brilliant acting, the Trevor Slatery twist didn’t even bother me! He’s so funny! Granted, Aldridge Killian could have been more interesting, rather than just another white-tech-guy-rival of Tony (like all three movie villains), but at least he used the biologically based Extremis instead of just another modification of the Iron Man suit.

U:3 This movie gets unique points because of the challenge it had to follow up the ground-breaking Avengers film. Many people doubted if a solo-hero film could cary the weight of the franchise, but it did! And although it felt very strange to attend a movie so Christmas-based being released in May, at least the Christmas twist gave the movie some fun jokes to work with.

S:3 Gwyneth Paltrow has been a gem since the very first Iron Man film, making Pepper Potts one of the few love-interests that we actually believe could hold her own and do what she claims (sorry Natalie Portman, I just don’t believe you as a Nobel-Prize winning physicist), and she actually has some great character development to boot! And although many fans were worried when Terrence Howard gave up the Rhodey mantle, Don Cheadle does such a great job with it that we almost wish he had been Rhodey all along!

M: 4 This was surely a fun movie, with some great memorable moments. I say “airplane scene” and you know exactly the one I’m talking about. Did you know they had real sky-divers wearing special parachutes under their costumes to film that scene? And who can forget the epic sight of 41 Iron Men flying up to save the day. And those one liners between Tony Stark and Ty Simpkins (now of Jurassic World and Insidious fame)? Classic.

Final Score: 18 – Although this movie wasn’t met with as much praise as the studio hoped, I feel like that was from over-hype rather than an under-performing movie. It’s fun, funny, and a nice break from the epic city-destroying mayhem of most other superhero films. This was the first film of “Phase Two” and had the huge responsibility to follow the unbelievably successful Avengers movie, so just for keeping the franchise not just alive, but alive and well, it has my respect.