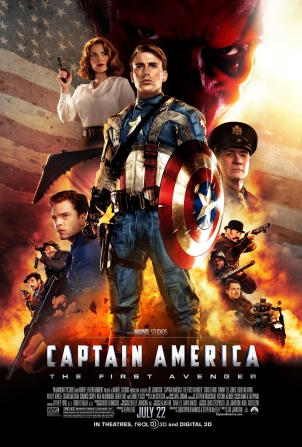 H:2 Let’s be honest, guys: as great as Chris Evans is, Steve Rogers is probably the most boring super hero ever, second only to Superman. Sounds harsh, but look at him: aside from his sciencey-magic-potion transformation from weakling to super soldier, he has zero character development. He doesn’t grow or change at all as a character. He starts as a good guy wanting to do the right thing, and he ends that way. Boring. Give us at least one character flaw to have him resolve. In the worlds of Tony Stark, “I don’t trust a guy without a dark side.”

V:2 But, as uninteresting as Steve Rogers is as a character, it’s nothing compared to how uninteresting his villain is. I realize that the Red Skull is the Cap comic book villain, but for a movie in which so much is grounded in gritty WW2 action, they really should have interpreted him to look less cartoony. Marvel proved in Guardians of the Galaxy that it’s possible to take ridiculous comic book characters and make them cool on-screen, they just couldn’t pull it off for the Red Skull, which is a shame. It gets a two just because at least Hugo Weaving is always amazing.

U:5 Ok, ok, I’ll concede that this was at least one of the most unique marvel films, mostly because it’s the only one to not take place in the modern world (unless you count the final 5 minutes). The World War 2 era SHIELD and Hydra were so much fun to witness, and it provided a great foundation for what the organizations would become in the future.

S:3 This movie scores a three for secondary characters mainly because of the brilliant work from Stanley Tucci and Tommy Lee Jones. Sadly, although the characters were written well, none of them really developed in any significant way. Even the friendship between Bucky Barnes and Cap, which is a major source of plot for the next two films, felt flat and uninspired. Honestly when watching Winter Soldier and Civil War I was confused about why Rogers cared so much about Barnes, because this movie failed to create a memorable or believable best-friendship.

M:5 But, given all that, this movie has some great memorable moments. Just the transformation scene where we go from wimpy Steve to super soldier is amazing. And there are two lines in particular that stand out from the script: first, in the back alleyway with the famed (and now repeated in Civil War) line “I could do this all day” perfectly demonstrating Cap’s fighting spirit. And second, perhaps the most devastating final line in any Marvel film, Cap looking around the real world and saying dejectedly, “I had a date,” just rips your heartstrings out.

Final Score: 17 – I can just hear the fan-girl gasps of shock at putting Cap in the bottom 5 on the list. But come on guys, let’s be real. As much as you may personally like Captain America, this movie was a bit of let down. The villain was perhaps the corniest of all the marvel films and there was practically zero character development. The best thing this movie did was introduce the Tesseract, which, surprise surprise, would turn out to have a pivotal role in both of the Avengers movies.

One thought on “#9 – Captain America: The First Avenger”