For several years, Mormonism has been growing in popularity. From Mitt Romney’s presidential campaign to Mormon celebrities like Aaron Eckhart, David Archuleta, and Glenn Beck, Mormons have been more and more in the public eye lately.

Since The Church of Jesus Christ of Latter-Day Saints (commonly referred to as LDS or Mormon) was founded in 1830, there has been a never-ending rumor mill surrounding what the members of the LDS church do or do not believe and practice. And since ignorance breeds misunderstanding, let’s set the record straight for 5 of these rumors.

Myth #1: Mormons are not Christian.

The official name of the “Mormon” church is The Church of Jesus Christ of Latter-Day Saints. We have the name of Christ in the name of our church! Or course we are Christian!

We worship Christ as our Savior and Redeemer. We know that it is only through the Grace and power of Christ that a man can be forgiven of his sins and saved. We strive throughout our lives to emulate Christ in our words and actions. We pray in His name, we worship Him, and we know that “there is none other name under heaven given among men, whereby we must be saved.” (Acts 4:12)

“We, of course, accept Jesus Christ as our Leader, our King, our Savior… the living Son of the living God. He is our Savior and our Redeemer through whose atoning sacrifice has come the opportunity of eternal life. Members of The Church of Jesus Christ of Latter-day Saints pray and worship in the name of Jesus Christ. He is the center of our faith…”

-Gordon B. Hinkley, 15th President of the Church of Jesus Christ of Latter-Day Saints

Like the first myth, this is also false. let me state plainly and clearly that LDS members do not worship Joseph Smith.

For those unfamiliar with the name, Joseph Smith was the young man who, in 1830, founded the Church of Jesus Christ of Latter-Day Saints under the direction and authority of God, according to LDS beliefs. Mormons revere Joseph Smith in the same way the Hebrew people revered Abraham or Moses, Lutherans revere Martin Luther, and the way Catholics revere Pope Francis. We believe him to be a prophet and a man of God, but we do not believe him to be God or our Savior. That role, as stated previously, resides wholly and uniquely in Jesus Christ.

Myth #3: Mormons believe they are the only ones who will go to Heaven

Unlike the other myths, I can at least see how this misunderstanding of our doctrine came about. Although we do not believe that only Mormons will go to heaven, we do believe, as is stated in the Bible, that only those who have received the proper ordinances will (such as Baptism. See John 3:5, Mark 16:16). Many theologians have questioned how a loving and caring God could desire to save all of his children, yet only accept those who have been baptized. Let me explain the Mormon perspective:

f you have ever seen a building like the ones on the right, then you have seen an LDS Temple. Temples are different from church meetinghouses in that we do not go here on Sunday for our typical worship services. Within these temples, we perform work 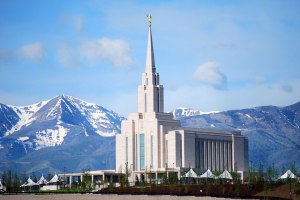 vicariously for those who have died without the privilege to receive them for themselves. This includes baptism for the dead, in which a living person is baptized in the name of a deceased person, usually a family member or ancestor. According to LDS doctrine, that person will then have the opportunity to accept or reject that baptism in the next life. In this manner, every person who has ever lived on the earth, in any place or in any time, will have the possibility to accept a baptism done on their behalf. In this way, God is both merciful to allow everyone an equal opportunity of salvation, without changing what His word declares.

The LDS church has not endorsed the practice of polygamy since 1890. No church member is permitted to have more than one wife. In The Family: A Proclamation to the World, church leaders clearly state the churches views on families and marriage: “marriage between a man and a woman is ordained of God”. A man and a woman. Not a man and many women.

Many of these misunderstandings have come from the off-shoots of the LDS church, such as the R-LDS and the F-LDS churches. When you hear of the “sects” that live in polygamy compounds in places like Utah or Idaho, rest assured that those people do not belong to the LDS church.

If you would like to know more about the practice of polygamy during the earliest days of the church, find it here.

Myth #5: Mormons do not believe in the Bible

Mormons believe the Bible to be the word of God as far as it is translated correctly. We love the Bible. We treasure it. Mormon youth spend two years of their high-school careers studying the Bible in religious education classes.

But we do not believe that the Bible is the only thing God has ever spoken. In the LDS Church, we also believe in The Book of Mormon (where the church’s nickname came from), which is a collection of writings from ancient prophets on the American continent, the way the Bible is the collection of writings of ancient prophets around Jerusalem. The Book of Mormon does not surpass, replace, or diminish the Bible. It is another witness that Jesus is the Christ, and helps to strengthen the faith of LDS people alongside the Bible. To Mormons, this fits perfectly with the admonition of 2 Corinthians 13:1, which states that “by the word of two or three witnesses shall every word be established.” The Bible was the first witness of Jesus Christ, The Book of Mormon is the second witness of Him.

For more information on the Mormon church or to find answers to other questions about our faith, please visit www.mormon.org.

One thought on “5 Myths about Mormons”