Waking up today was very strange. Realizing that it was the very last day of this 3 ½ week long adventure was bittersweet. It seems like just a short time ago that we had decided to go on this trip and we were reading Rick Steve’s books religiously and trying to plan all the things we wanted to do. And now, here we are, about to go home. Luckily we had one final day to take advantage of before our 22 hours of travel time. But lets not think about that now. Let’s just think about the beach. That’s where we spent our day, after all. 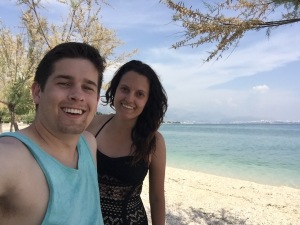 We got up and leisurely made our way to the beach using bicycles provided by our host. We stopped for a quick breakfast, which actually turned out to be just some crackers and yoghurt. Then we got to spend the entire morning sitting on the beach, just staring out at the water. I decided that I didn’t want to get in the water until after lunch, so we just sat in the shade and swapped stories. It was amazingly relaxing after so much running about for three weeks.

At lunch both Sam and I realized that we have way too much Coatian money left. We had tried to predict how much we would need, but everything is much cheaper here than it has been in Sweden, Switzerland, Italy, etc. So we sort of splurged on our lunch. Then, of course, we got gelato. Gotta have that gelato.

After lunch we finally took the plunge into the water. As always, it was so pefectly clear that when we stood in water two feet deep we could see schools of fish swimming around our legs. I tried filming them with the undewater camera, but aparently cameras look like sharks to them or something. After swimming around a bit we sprawled out on the rocky shore and laid in the sun. I’m not one who usually likes to lay around tanning, but boy was it relaxing. Unfortunately I started feeling my whiter-than-I-like-to-admit skin burning within 10 minutes, despite 3 reapplications of sunblock.

At that point we got back into the water, letting the super high salt concentration float us easily on our backs. I went back to get the camera for some more underwater shenanigans, I discovered to my utmost horror that it had accidentally turned on in my bag, and the battery had completely worn out. So sadly, we didn’t get many last-day videos.

When all that was over we headed back to the apartment, showered off the salt water, and headed out for one last dinner. We knew we had to spend whatever Croatian kuna we had left, so we both got two delicious courses. I think Sam and I will both be pretty pasta spoiled after this trip. My math paid off, because after dinner I had exactly 7 kuna left: the exact price of one last gelato. Win. 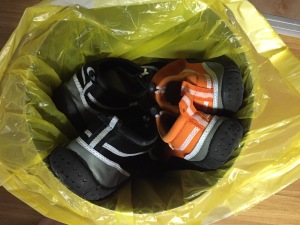 We were a bit confused about our feelings as we went home to pack. As sad as we were that the trip was over, we have both gotten to the point of being pretty tired of traveling, and we are both looking forward to having our own beds again. So I stuffed my bag (which actually feels lighter than just last time I packed) and threw away those cheap water shoes that started falling apart the first day I bought them. It was a sort of poetic symbol for the end of the trip, you know, if you’re into that sort of thing. After we packed up our bags and went to bed early for our 8am flight, I laid awake a bit reminiscing on how strange it was to be leaving, and how recently it seemed like we were having troubles with my Visa, or playing in Trafalga, and staring jaw-dropped from the top of the alps. Sam wanted to stay up even later asking questions about my favorite places or favorite meals, but I insisted we go to sleep, both because of the early(ish) flight, and because I had started feeling a cold coming on that day.

And that’s it. Tomorrow we fly home. See you soon America!