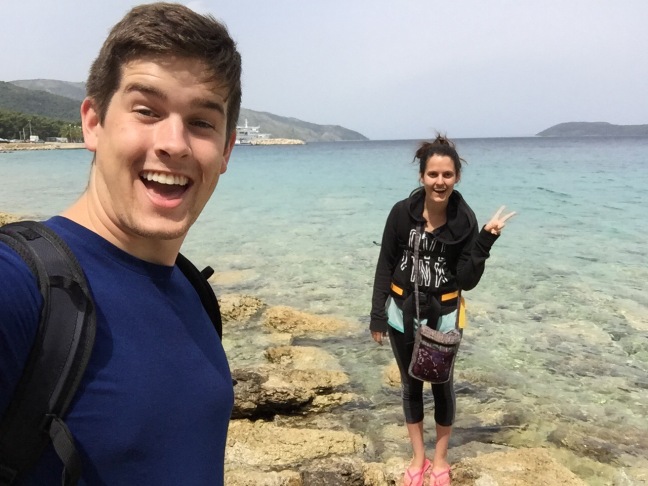 There isn’t much to say about my nights sleep aboard the ferry other than that it was sporadic and shallow. Although, as predcted, I got a better night than Sam, who basically only dozed for a couple hours and then wandered the halls of the ferry like a poltergeist.

The ferry arrived in Split, Croatia at 7:15 am. At that point, we had planned to go from Split to Dubrovnik, in the south of Croatia. But when i looked up the transportation schedule, the only way to get there was by bus, and it was a 4 hour 45 minute journey. After our night aboard the ferry, neither of us felt up to that. So we grabbed seats in a local cafe and whipped out our phones to Google other Croatian locations closer to Split. We both found information about an island named Hvar, which was said to have some of Croatia’s nicest beaches, so we got aboard an 8:30 ferry that would take us there. We thought that we would be going to the city of Hvar, so we started looking up hostels and bed n’ breakfasts there. Well, it turned out that the boat docked in the more northern part of the island called Hvar, but not in the city Hvar. The city was actually Stari Grad. So essentially we wound up in a completley random city that had never been a part of our plan, and wasn’t even part of our spontaneous change-of-plans plan.

Well once again we got a seat in a cafe and whipped out the phones. Thank goodness T-Mobile gave us unlimited data while traveling, or we would have been in serious trouble on several occasions. We found a place to stay on Airbnb, but the owner told us that they wouldn’t be back until around 1pm. This was at about 11. So we got some breakfast, which was closer in time to lunch but since we hadn’t eaten on eithe of the ferrys that morning, it was our breakfast. Then we stated the 20 minute walk to the bnb, figguring we would just explore along the way.

The walk was beautiful! It was a gorgeous scenic path along the shoreline, with the most crystal clea water i’ve ever seen anywhere. It actually reminded me more of a mountain lake than a mediteranean island though, because the shores on both sides of the inlet were lined with pine trees and conniferous vegitation, not the palm trees and tropical plants I had expected. We paused for a few minutes to put our bags down and walk along the pebbly shore, and I showed Sam how to skip rocks. She started getting pretty good after a little while. We then continued on to the bnb, but arrived at noon and so we sat for about an hour waiting (which was when I took the time to write about day 21).

When our host finally arrived, she told us that the room wasn’t ready yet, and she needed 2 hours to clean and prep it. So we put our bags down and took a 2 hour stroll into the nearby town and ate a real lunch, and even brought the leftovers back with us. 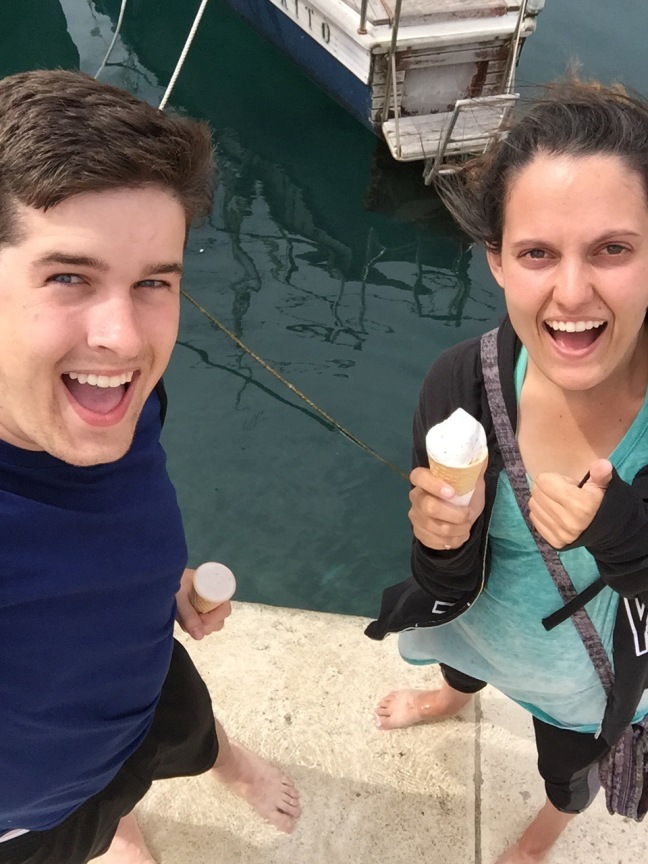 While we were out walking and enjoying yet another gelato, we witnessed an apparently rare and very cool event: the water level rose from the combination of a high tide and low barometric pressure, rising all the way up and over the side of the pier! Water came up past our ankles, so we took off our shoes and played in the encroaching sea.

Once we were back and the room was done Sam basically collapsed onto the bed for a two hour nap. The night on the ferry hadn’t been great for her. Meanwhile, I watched a movie. We didn’t go back out that night. We had leftovers for dinner and made funy Dubsmash videos, like the one below. Then we watched another movie as what sounded like tropical storm winds roared outisde.

At first I felt like I was wasting precious vacation time today, but when I stopped to think about it, I realized that that is what this last week is for: unwinding and simply relaxing. There are no sights that I really need to see, no schedule that I need to keep. There ins’t a Duomo or cathedral or mountain peak or museum. It’s just about relaxing and enjoying Croatia. And honestly, as much as I’ve loved our trip so far, I definitely underestimated how exhausing 3 ½ weeks of constant sight-seeing and moving about is. I’m really looking forward to the next 4 or 5 days to just sit back, maybe go to the beach, maybe check out the town, but mostly just do whatever I feel like.