OK, so it doesn’t have as nice of a ring to it as Charlie and the Chocolate a Factory, but this is how I felt today. We woke up bright and early. By which I mean I set the alarm for 6:45 and we snoozed til the last possible second. We had breakfast at the hotel, then went to the train station to board the magical “Chocolate Train”! Basically it’s a train that travels through the most breathtaking Swiss landscape imaginable, and takes you first to a chocolate factory and then to Gruyeres and the cheese factory.

The train ride was beautiful of course. But who cares about that? We got to go to a freakin CHOCOLATE FACTORY!!! The entire factory, and even the town around the factory, smelled like warm chocolate. Living there would be amazing. And dangerous. The first few rooms were animatronic scenes on the history of chocolate, which was interesting, but then we got to the room about the ingredients. That room was drool-inducing.

The information about the cocoa beans and other ingredients was interesting, but we got to hold and smell all the fresh ingredients, which was the best part. My hands smelled lake hazelnuts and chocolate after, and I didn’t want to wash them. Ever. The next area showed the process of how the chocolate is actually made, and I was shocked to find out that it takes more than just microwaving chocolate beans. (Kidding.) it actually was interesting and waaaay more complicated than I could have imagined. 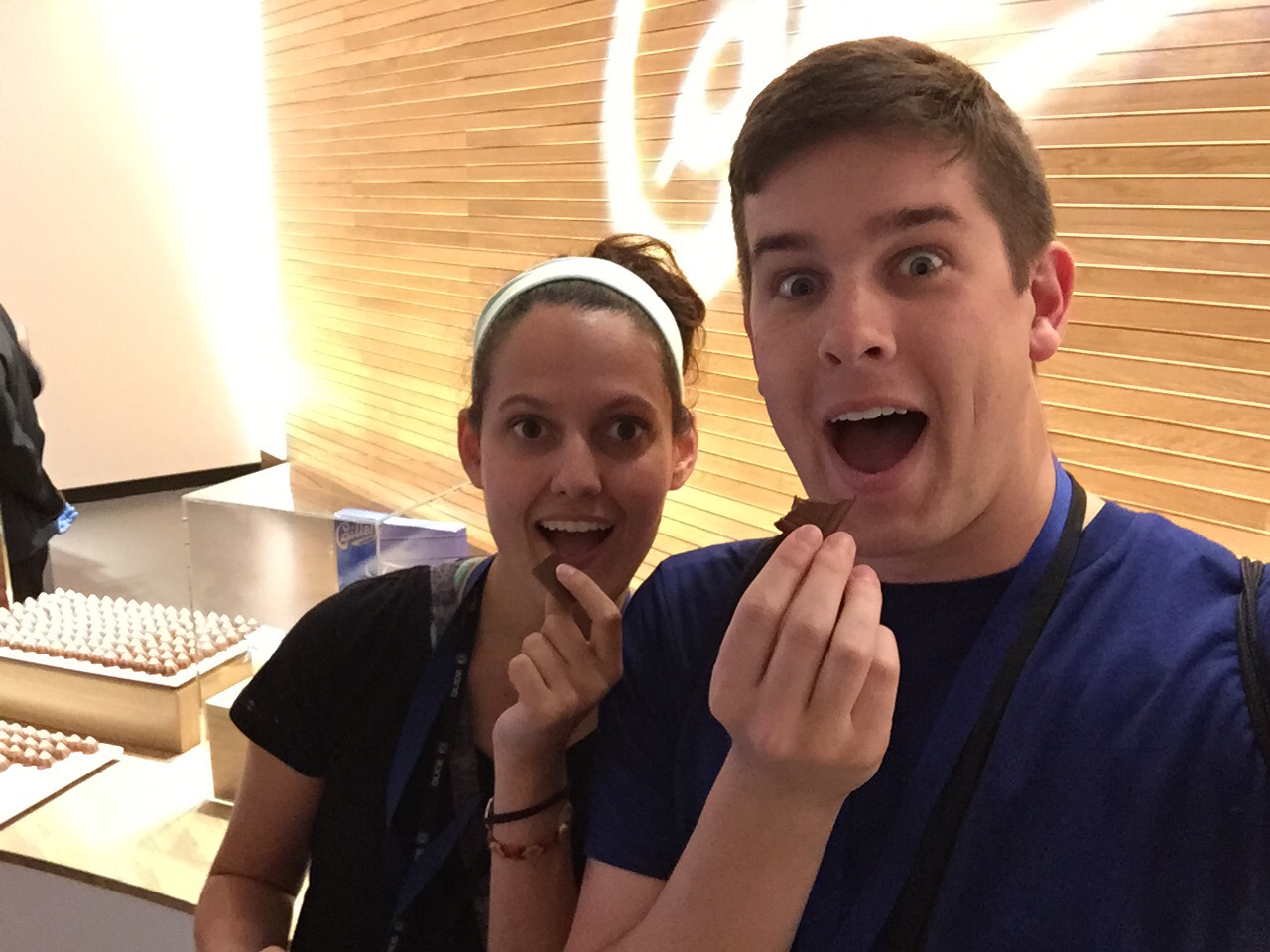 Then came the chocolate tasting. OH MY GOSH THE CHOCOLATE TASTING. Excuse me, but I about died. First, because who wouldn’t die from sampling the worlds best chocolates. But also because it turns out that eating 10 of the richest, sweetest chocolates right in a row actually makes you feel way sicker than you might realize. Seriously. Half way in I stopped eating the full chocolate and only ate a bite. Unless I really loved it. Which I did. So, basically, I felt sick after. Oh well. 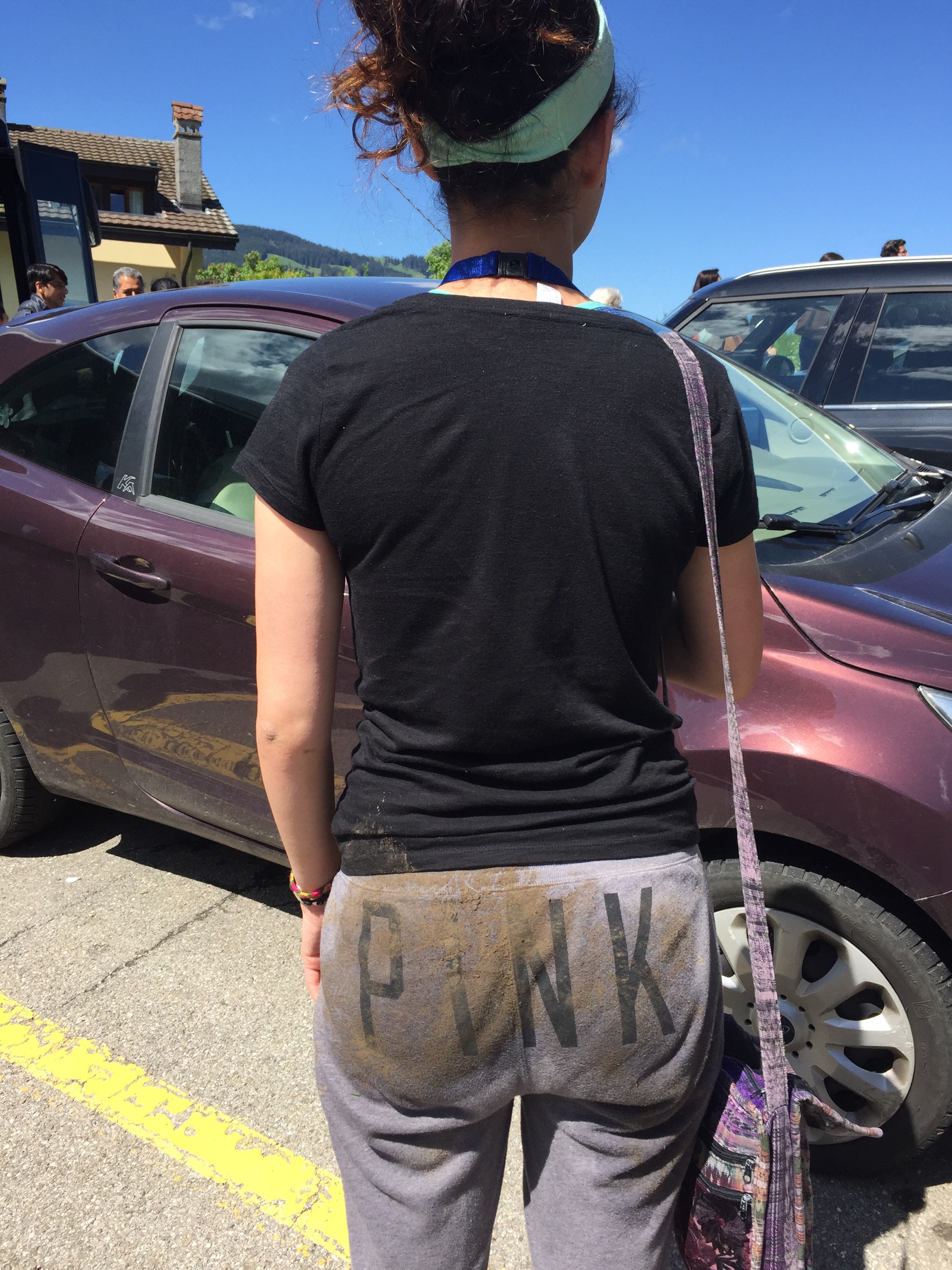 After shopping in the obligatory chocolate gift shop, Sam and I were running back to the bus, which was scheduled to leave soon, and Sam slipped. In mud. At first I was scared she had hurt something, because she hit hard. But once she stood up and was fine, we couldn’t stop laughing. She was covered. And we couldn’t go home until the rest of the tour was over, which was another 5 hours.

Well soon the laughter wore off and Sam was mostly just mad that her pants were muddy and wet. So when we got to Gruyeres we tried looking for some. Turns out Gruyeres is just a medieval town replication with nothing but museums, restaurants, and gift shops. But no pants anywhere. So we had lunch and I saw the castle, and then we headed off to the cheese factory. But it was a bit of a let-down after the chocolate factory. Still we got some free cheese samples, which was cool I guess.

When we finally got back home we changed home and went to H&M so Sam could buy some shorts. Turns out H&M in Europe is the exact same as in the U.S. Go figgure. Then we came back to the room and relaxed with some chocolate and TV. So I guess I might be more like Mike TV than Charlie, but oh well.

2 thoughts on “TJ and the Chocolate Factory – Europe Day 13”