This morning we ate breakfast (some delicious chocolate chip cookie type things) at the train station in Switzerland, then boarded a train for Germany. We arrived in the lovely southern town of Feiburg, because we figured we had to see at least one place in Germany while we were so close.

Freiburg is considered the capital of southern Germany’s Black Forest. The town itself has modernized quite a bit, with high end shops lining its pedestrian friendly roads, but still retains old-fashioned charms like tiny canals of water that line every street (originally built to aide putting out fires) and a daily market held in the square of the towns large gothic cathedral. 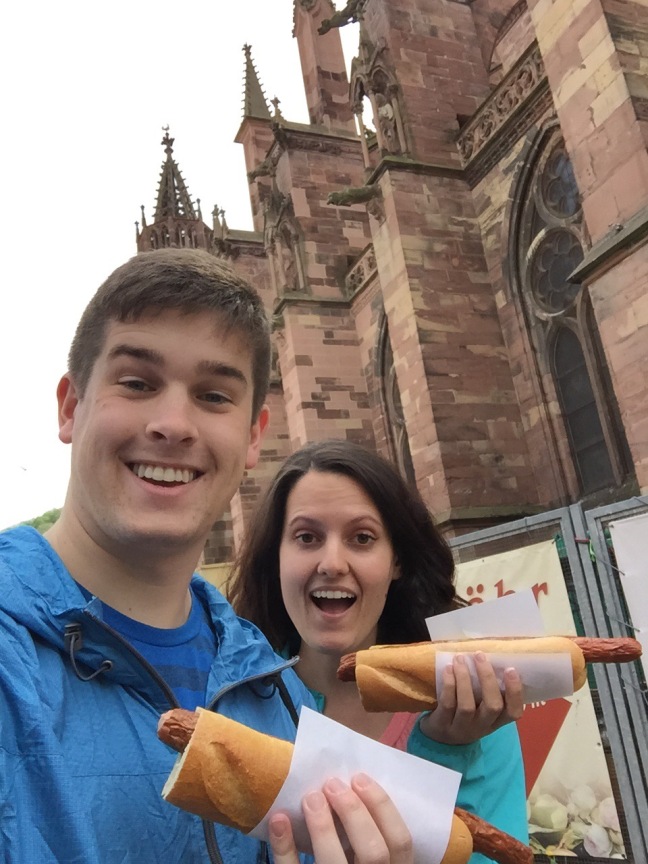 We exchanged cash for some Euros, walked the streets and wandered the market, and bought some delicious bratwursts for lunch, which we ate on the steps in front of the cathedral. As we entered the cathedral it was easy to imagine how it would have looked 500 years ago, as local farmers flocked to its chiming bells and towering steeple, sat beneath the enormous vaulted ceilings, and listened to a sermon (which would have been given in Latin and they wouldn’t have understood, but still).

We then started wandering the town, not really sure where to go. I had read about a hill with a tower that was supposed to offer a great view of the surrounding area, and we sort of just stumbled upon it! The hike up the hill was longer and harder than I expected, but it was through a lovely forest and offered some great views. But once we reached the top and climbed the four-story tower, we were stunned. We could see the Black Forest extending out for miles in the hilly land scape. The steeple of the cathedral jutted out high over the town, and way in the distance lay the rolling peaks of a French mountain range. 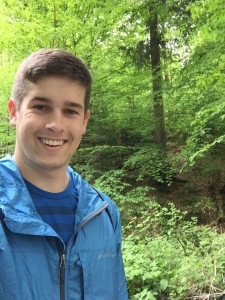 By that time we were basically done in Freiburg, but I didn’t want to leave without walking in the Black Forest. So I looked on the train map and found a small stop that seemed to be right at the edge. When we stepped off the train and were a little surprised to be at a ghetto, abandoned-looking station. But, true to the map, the Black Forest was just a few steps away. So we took some time walking through the trails. It gave me a new understanding of all the Grimm fairy tales about those forests. There is something inherently creepy about them. I totally get why so many of those stories were about little kids getting lost and witches living in there.

We then made our way back to Basel, Switzerland. Sam had gotten very cold so we returned to our host’s apartment to grab jackets, and then we took a tram to dinner. We had gotten a recommendation for a Japanese place just across the French border, so that is where we went. It was amazing how easy it was to get to. The tram took about 5 minutes and dropped us 10 yards from the border. We walked across, and another 20 yards down the street was the restaurant. It wasn’t the best Japanese food I’ve had, but it was good enough and pretty cheap.

So that is how we ended up having breakfast in Switzerland, lunch in Germany, and dinner in France. It was a very nice day. Tomorrow we head off to see the Swiss Alps, but the forecast is nothing but rain for the next week. Hopefully we’ll get at least an hour or two of sunlight to get a good view of the mountains.