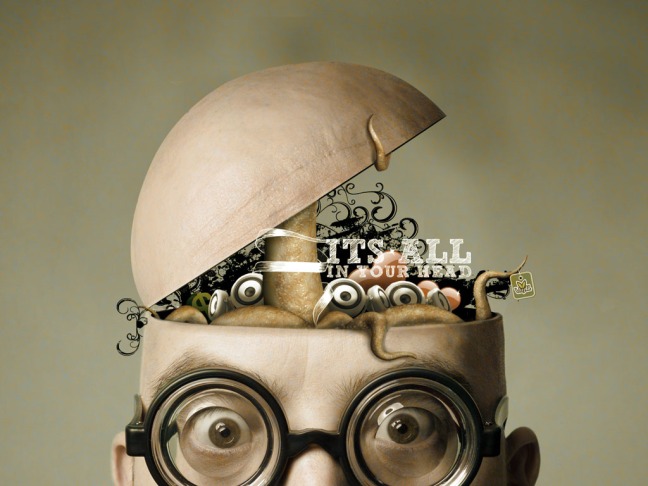 It’s All in Your Head

A Short Story by TJ

The little purple fuzz-ball wasn’t sure what had happened. One second it had been relaxing peacefully in the quiet “I wonder how many calories are in this?” room, when the next, all the lights went out. Thought energy stopped buzzing by in the hallway outside, the screams normally emanating from the locked room of hidden insecurities had died out, and the fuzz-ball was pretty sure everything was sideways.

“Very peculiar…” it thought. It knew its host’s brain wasn’t a particularly active one, but it had never seen the entire thing shut down before.

It jumped out of its recliner and dashed to the door, peeking out to see what had happened. Hundreds of doors lined both sides of the hallway, stretching into the distant blackness.

“Is it dead?” it thought. It ran down the hallway to the room of painful childhood memories and swung the door open. Nothing happened. No ghostly specters flew out, and no repression robots came to shut it again. “Yup. It’s dead.”

The fuzz-ball knew there was only one thing to do. It dashed down the hall and to the emergency exit. The normal entryway of most information, the eyes, would surely be shut down too, and besides there were so many hoops to jump through when using that entrance. So, it headed for the one it knew would still be open: the ears. Often its host had mentioned a thought passing in one ear and out the other, and that was exactly what it planned to do.

It arrived at the cavernous hole, stretching up what seemed to be forever. “Well, here goes nothing,” it said to no one, and stepped off the edge, floating upward into the dark tunnel before it. For a while it worried it might never reach the end of the canal, but soon it saw lights ahead. It couldn’t quite be sure, because it wasn’t used to dealing with such primitive wavelengths as light and color, but it thought the lights must be blue and red, and they wouldn’t stop flashing.

The fuzz-ball felt very cold and vulnerable floating in the expanse of the outside world. It needed to find a new home, and quickly. A flash of brain waves splashed before it, and the fuzz-ball made its way toward the waves as quickly as it could. As it arrived it made its way through the heavy strands of yellowish matter hanging from an infinitely far origin, finding another ear canal to enter. Safe again in the warm darkness of the tunnel it began wondering what its new hosts brain might be like. It hoped the walls were beige like in its last brain. The one before that, the philosophy major, had every square inch of its brain plastered with useless drivel about purpose and meaning, with the occasional image of what the fuzz-ball assumed to be the host’s mate.

As it floated out of the ear canal, it was speechless. This brain was nothing like the ones it had previously lived in. The size was the same, but this one was bustling with activity. There were no hallways or rooms that were only visited by necessity: this brain was a super-highway of thought energy, all bouncing from one place to another, like the pinball machine its last host had loved so much. It had heard of these sort of hyper-active brains, but had never actually lived in one: it was a female brain.

It floated further into the mass of chaotic movement, unsure if it would be able to find any place to settle down and rest. Suddenly a burst of thought energy surged right into the fuzz-ball and disintegrated. The fuzz-ball was knocked backwards, slamming into a nearby idea post. (And it was a terrible idea to boot. Water-proof towels.)

“Are you okay?” a voice called out.

“Yes, I am…” the first fuzz-ball replied, still a bit shocked.

“Good, well we better keep moving. It isn’t safe to be out here with all this thought energy.”

The two floated side by side, dodging around the passing surges of thoughts.

“So what’s your name?” the second fuzz-ball asked the first.

“Hmm.” It hadn’t thought about that. Did it have a name? What is a name anyway? Does having one somehow change what one is? It cursed the philosophy major it had lived in two hosts prior. “Well, I guess you can call me Gary.”

“Oh I love that name!” the second one said. “I don’t really have a name. But my host calls me brain-fart.”

“You know, when thought energy touches us and it evaporates? Well the host has to send more thought energy to complete that original task, so it feels like it’s brain stopped working, and they call that a brain-fart.”

“No, but that’s why I try staying out of the way,” brain-fart said. “I don’t like upsetting the host.”

“It must be difficult to stay out of the way with all this movement! My last brain was nothing like this one.”

“Well,” Gary explained, “It was a male brain. Much safer place, you know. These female brains are so wild and unpredictable in the patterns of their thought energy. How do you ever know where it’s safe to be? It seems like every little bit of her brain is filled with some thought or another.”

The second fuzz-ball nodded. “Yes, it is rather tricky to predict where the thoughts will end up. For example, see that energy? Heading towards the ‘daycare schedule’ post?”

“That thought started off as musing about whether or not the owner wanted to buy a new purse.”

Gary shook his head in disgust. “See? That’s what I mean. That thought should have gone straight to the purchasing room. What a waste of energy.”

“How could anyone possibly have the energy for that much thought?” Gary asked.

Gary squinted at a distant surge of energy bouncing towards the ‘what’s on tv tonight?’ post, and saw a faint yellowish hue radiating off it. “I hadn’t noticed that. In the male brain all the thoughts were clear. Except when they were particularly angry thoughts.”

“Right! Thoughts that have emotion in them glow depending on the color of the mood.”

“But… How could tonight’s TV schedule possibly have an emotion in it?”

“The female hosts have emotion behind every thought. That is what gives the thoughts so much energy.”

“Well, to be honest, it is. But they’d never let the males know that.”

Gary floated beside brain-fart in shock. “I can’t imagine living like this…”

Brain-fart smiled. “You get used to it. I’ve lived in ten hosts so far, three female and seven male. It’s easier to get into the men’s hosts brains, you see. They are constantly open to wandering thoughts. You have to catch the female brain at a moment of distraction. You, for example, entered her ear while she was calling the paramedics about the car accident your previous host died in.”

“How do you possibly find places to live here? It seems like there aren’t any safe, unvisited areas.”

“Well, they are hard to find, but every now and again I find a good one. For the past several years I’ve been living at the ‘how to react to an emotionally sensitive male’ post. It’s a pretty quiet area. You’re welcome to stay there with me if you like.”

“I’m not sure… I think I’ll have a look around before I decide.”

Gary spent the rest day exploring the dangerous female brain. It floated as carefully as it could through the thoughts, but it seemed like no matter where it tried exploring, a thought was bouncing around there. More than once, Gary was hit by thought energy, and the host made several comments to her friends about how spacy she felt that day.

It continued exploring on its own, while brain-fart tracked the fascinating evolution of a thought that had originated at ‘pick up the dry cleaning’ and was now at ‘I wonder if mother is coming for Christmas’. As Gary wandered, it followed a lovely bluish looking thought passing by the ‘I wonder what movies are coming out this weekend’ post. Gary followed the thought, and was lost for three days.

When Gary finally found brain-fart again, it knew it had to move out.

“I’m sorry, but I’m just not ready for this. There’s too much going on. I literally got lost in her thoughts.”

“It’s ok, I understand,” brain-fart said. “It’s a lot to take in. But, before you go, I want to show you something.” Gary obliged, making extra sure to stay as close to brain-fart as possible as they floated to the center of the brain. The deeper they went, the more vivid the emotional color became, until everything around them was bathed in warm, glowing hues of blues, oranges, pinks, and greens.

Gary could no longer see individual thoughts or emotions. They melted together, swirling in a beautiful fluid pool that encompassed everything.

Gary looked, but saw only more of the wonderful colors. But as it continued watching the colors took form, and it saw the radiant image of a laughing baby.

Gary watched as memories made of pure emotion played before it. It saw the woman’s recent memory of holding her baby boy. It saw her distant past as she sat with her own mother on a lazy Saturday, reading together. It saw when she first met her husband at a party she hadn’t wanted to attend, and how profoundly she loved him. Gary was speechless.

“I…” it stammered. “I’ve never seen anything like this.”

“This is what makes the female brain so beautiful,” brain-fart explained, not taking his eyes of the swirling images. “Not that the males can’t achieve this level of emotional intimacy, it just takes much longer. It’s one of the reasons the males are constantly drawn to them.” It turned to face Gary. “I understand if you aren’t ready to live here permanently quite yet. I admit, it does take some getting used to. But don’t turn your back on it forever. If you do, you’ll miss out on some truly beautiful things.”

Gary nodded, then bid brain-fart farewell and headed to the ear canal. It imagined a quiet, worry free life in another host. Maybe this time it could find a computer programmer. It would have the entire ‘human interaction’ part of the brain all to itself! And a computer programmer would almost certainly be a male. As it reached the ear canal it turned and looked over the surges of energy racing from post to post. As dangerous as it looked, Gary could hardly wait to be ready for it.

This is just a fun piece of short fiction that I wrote after writing my popular articles about men’s brains, women’s brains, and their differences. There is no offense intended, it is all purely observational humor. Thanks for reading!