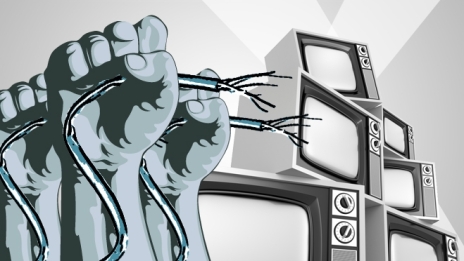 The Cable Companies are scrambling. They are losing subscribers for the first time since they started doing business, and they are losing them fast. In the third quarter of 2014 alone, 150,000 subscribes canceled their subscriptions and didn’t move to a different company. Instead, they went the cord-cutting route of Netflix, Hulu Plus, and other online services. Here is why you should too.

You won’t miss out on anything.

I don’t subscribe to cable. My apartment comes with a basic cable package, but I never use it. I have a subscription to Netflix and Hulu Plus, and that covers all of my television needs. In fact, by cutting the cable cord and subscribing to these online

services, you probably will get more for less. For example, Netflix has some amazing original series that you can’t get anywhere else. Like The Unbreakable Kimmy Schmidt, or the very popular series House of Cards.

And for those of you who are afraid that you will miss out on cable-only offerings like HBO’s many popular series or ESPN programing, never fear! Both companies have started offering independent streaming services! Just last week, HBO announced a new HBO Now program that will work on any Apple device, which you can subscribe to for only $15 a month (for you serious Game of Thrones fans, this is a huge deal!) And ESPN has had offerings on Sling, Roku, and other TV boxes for a while. So, don’t fret about missing out. It’s the cable subscribers who are really missing out.

There are even FREE options, like Yahoo Screen. Yahoo is new to the online-video streaming service, but after watching the premier of the frequently-canceled-then-uncanceled-then-recanceld TV show Community that they produced and put online for free, I’m sold. Seriously. It was fantastic.

If you are paying anything over $20 a month to get all the shows you want, you are paying too much. Cable companies have failed to match their prices to stay competitive. Most cable companies offer their lowest packages for around $60. I pay $15 and never miss an episode. I give $7 to Netflix and $8 to Hulu Plus, and I get all the past seasons and current episodes right on my TV. In fact, I’m watching last night’s episode of Flash right now!

Even if you are the type of person who feels like they have to watch things as they happen live, there are non-cable options! Sling, a relatively new offering, will give you live-streaming over the internet for $20 a month, including popular channels like ESPN. That’s a third the cost of the cheapest cable offering!

Streaming is so much more convenient

In middle school I would plan my week around Lost. It was my favorite show, so I would make sure that nothing got in my way of watching it. One could argue that I could have used a DVR, but we didn’t have that in my house, and most cable companies charge extra for it. Now as a cord-cutter, I can watch any show I want, any time I want, without ever having to worry about wether or not I’ve set a DVR or if I’m recording over something else! PLUS, the commercial breaks are shorter. There really is no downside to this.

Do yourself a favor. Cut the cord. Buy one of the dozens of available TV boxes (Apple TV, Roku, Google Chrome Cast, Amazon Fire Stick, etc) and enjoy life free of the oppressive Cable Regime. You won’t regret it.

7 thoughts on “The Age of the Cord-Cutters”