On April 10th, Apple opens up pre-orders for their long-rumored, heavily-anticipated Watch. There are a lot of reasons NOT to buy an Apple Watch. A $350 minimum price tag is one of them. A 18-karat gold version for $17,000 might be another. (honestly though, Apple. That’s a car.)

But despite all the reasons you might be telling yourself that you won’t be purchasing Apple’s newest product, here are the reasons you actually probably will, even if not right away.

1. Because it isn’t just a novelty item.

Lots of people are talking about how the Apple Watch is only going to be for rich business men or hard-core Apple fanboys. Well people said the same thing about the iPad. And the MacBook Air before that. And now they are the top-selling products in their categories. I know middle-schoolers with iPads and most of my college friends own MacBook Airs over any other MacBook model.

The hardware features included in the Apple Watch really are impressive. Heart-rate monitors have been in wrist-devices for a while, but how about that digital-crown or the touch screen that can tell how hard you are pressing? And what about the little motor inside that makes you feel like it’s tapping gently on your wrist? And, of course, all these hardware work seamlessly with the outstanding software Apple and other companies like Target, Nike, and Instagram have cooked up. Very soon you’ll see the everyday practicality and uses for a device like the Apple Watch.

2. Because Apple is doing it again

Apple has never been the company to do something first. 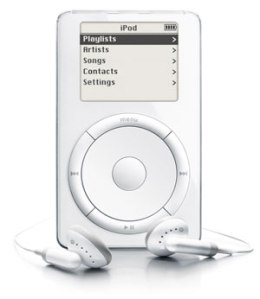 Smart watches have existed for years. But so far they’ve only been on the wrists of hard core workout junkies and runners or hardcore uber nerds. Apple is doing it again: they are making a category of products feel “cool”, and more importantly, making them seem important and useful though a strong emphasis on apps and software.

3. Because you’ve already done it

Check out your phone. For about 90% of my readers, your phone is a smartphone. For perhaps 50% of you, it’s an iPhone.

If you remember 2007 when the iPhone was released, it cost $600 WITH a 2 year cellular carrier contract. Everyone said it wouldn’t catch on. At that time the big-boss of the smartphone industry was the Blackberry. Well Apple quickly de-throned them and convinced the entire tech world to start making phones similar to the iPhone. And now you probably own one of them.

I’m not saying you’re going to pre-order an Apple Watch today, or even that you’ll have one within the next year. But mark my words, the day will come when you’ll be checking your wrist to see who just texted you.